Whatever was said in the dressing room at the interval certainly worked a treat as the Legion team that played in the second half bore little resemblance to the one that played the opening half. With Glenflesk in control and leading 2-7 to 1-5 something had to give and so it proved as a Finbarr Murphy inspired comeback saw them advance to the quarter finals where they will play  Firies who got the better of Spa in their tie. Finbarr helped himself to ten points and when the need was greatest Luke O’Donoghue also chipped in with some vital scores.

The second half revival was kickstarted by Peter McCarthy within the first minute and then Finbarr reeled off four points without reply from the visitors to draw the sides level. Glenflesk finally stopped the rot with a point but Podge O’Connor with a fisted point and Finbarr with another nudged Legion one up. Luke O’Donoghue then made two timely interventions kicking two vital scores but Glenflesk kept the game ticking away with another. Darragh O Doherty stole up field to land a beauty off the left but again Glenflesk replied to leave it a two point game with the finish line in sight. But fittingly Finbarr Murphy, who scored off both left and right, had the final word to make it a three point win on a 1-16 to 2-10 win.
TEAM.. Robert Osborne, Darragh O Doherty(0-1), Sean McCarthy, Peter O Sullivan, Darragh Fleming, Kieran O Donoghue, Alan Moriarty, Shaun Keane(0-1), Peter McCarthy(1-1), Stephen Flattery, Podge O’Connor(0-1), Finbarr Murphy(0-10), Luke O Donoghue(0-2), Tadhg Doolan.
Subs..Callum O’Grady for Kieran O Donoghue, Bryan Griffin for Tadhg Doolan, Mark Heffernan for Stephen Flattery. Colm O Cuiv,Tom Cronin, Ian Prendergast, Robert Lucey
Referee Brian Fleming. 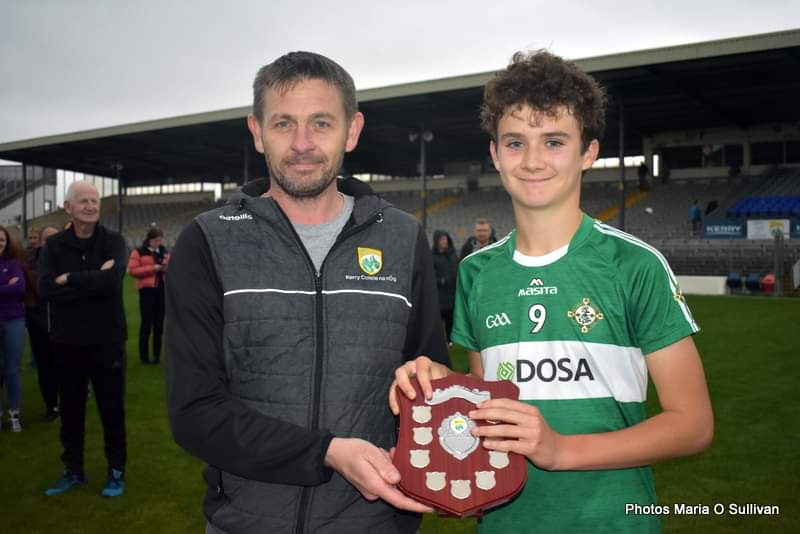 Killarney Legion captured the Lee Strand sponsored 2022 U13 County League Division 2 title after a hard earned win over a very competitive Firies team played in Fitzgerald Stadium. Regardless of the win, loss or draw tonight it would be remiss not to mention that this game was rearranged after the original game, played on June 27th, had to be abandoned after a Firies mentor took ill. The manner of his illness that night left both teams, management and spectators present with a deep sense of shock but more importantly and thankfully he made a full recovery thereafter and was back on the sideline with his team. In moments like that you realise that it’s only a game and life itself is more important than anything. In that sense alone it was great that everyone was there to witness the fixture and enjoy it.
What the year had shown so far was that there was very little between both teams and tonight’s game was no different. Jack Culloty opened the scoring with a point in the first minute and a good start soon became a dream start as Dara Horan struck for a wonderful goal and Ryan Kissane quickly followed that up with a cool finish into the corner. Firies though quickly found their stride and reeled off six points without reply in a ten minute spell and narrowed the gap to one point, 2-1 to 0-6. Cian Hegarty, a threat throughout, slipped over a nice point and Jack Culloty with a free brought Legions total to 2-3. Firies got their seventh and final point of the half and there were just two between the sides at half time, 2-3 to 0-7.
Cian Hegarty ,almost from the throw-in, got in behind the Firies defence , and crashed home a goal but Firies responded with a point of their own. Sean Lyne, introduced at half time, kicked two fine points as Liam Quirke got his name on the scoresheet as well and after 12 minutes of the second half Legion had stretched out the lead to six points, 3-6 to 0-9. But Firies were always a threat and Legion goalkeeper James Murphy had to be called into action twice in a five minute spell, pulling off two stunning saves. Jack Culloty and Cian Hegarty chipped over two more points but Firies were not going away and with the score at 3-8 to 0-12 the Legion rearguard had to be really on their toes to hold out the Firies attack.
James O Callaghan, Ronan O Brien, Jayden Hurley and sub Ewan McGillycuddy were staunch in their defending while outside them Conor Moynihan, William Fogarty and Jamie Fleming were heroic. Sean Lyne got his third point of the half to leave it at 3-9 to 0-12 . Firies though were pressing hard and they eventually broke through and scored a goal from a quickly taken free kick. With four minutes on the clock there was still work for the Legion to do but midfielders Samuel Scroope and Mark Looney got a grip on the game while Jack O Gradys ball winning ability throughout the game really came to the fore in those closing moments. Substitutes Micheal McElligott and Christopher Brosnan really put their shoulders to the wheel when introduced . Referee Cian Brady blew his whistle for the final time, a blast that was greeted by cheers of relief by the Legion faithful. The game also doubled up as the East Kerry Division 1 final while the U13 White team also captured their respective East Kerry title.
The management team will be at pains to tell you that the secret to their year was that all 37 boys involved at this level saw game time and it is a tribute to Enda Murphy, Sean Culloty, Brian Looney, Fergal Moynihan and Joe Hurley for the time and effort they put in. Equally so to the players who put in a great year’s work and got their reward.
Hard luck to Firies who are a fine team and there is no doubt these two teams will meet again in the future and that there’ll be little between the sides again.
A big thank you to Tommy Cronin for organising the final and Sean O Keeffe of the East Kerry Board for organising a superb East Kerry competition.
We would also like to extend our condolences to the family of Ger Clifford who passed away recently. Gers son Tim is the U13 Coiste na nOg Coordinator. 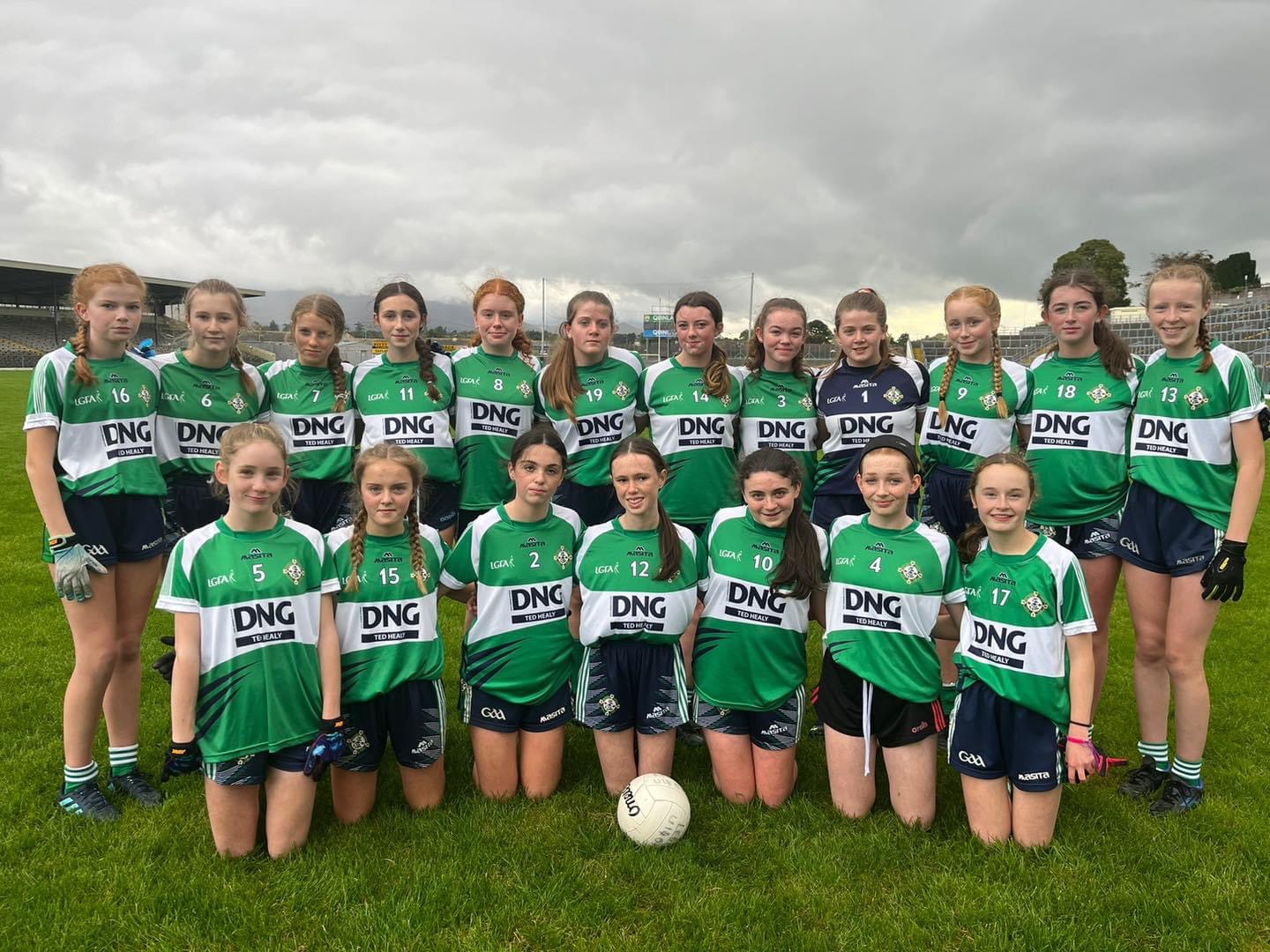 No joy for our U14 Green team as they lost out to a goal hungry Beaufort side in the East Kerry Division 2 Final played in Fitzgerald Stadium last Sunday evening. The first half was very promising with a five point lead going in at half time, 1-9 to 1-4. But Beaufort came out in the second half like a team possessed and ran in five goals. Hard to counteract that the girls kept ploughing away but couldn’t peg back the lead. Final score Killarney Legion 1-12 Beaufort 6-6.
The U16 girls will face Crokes in Round 3 of the East Kerry league in good form having accounted for Kilcummin in Direen last Tuesday evening. They had much the better of the first half but Kilcummin put in a mammoth effort in the second half meaning the girls had to keep the scoreboard ticking over, which they did.
Final score Killarney Legion 4-23 Kilcummin 6-8.
The minors face Laune Rangers next Friday with a place in the East Kerry League final up for grabs. With wins over Beaufort and Kilcummin a stiffer test was awaiting in Milltown last Friday evening in the shape of MKL Gaels. The girls though played very well and led by two points in the closing stages. But MKL Gaels won themselves a penalty at the death which they duly converted. Now a win over Laune Rangers will more than likely set up a reunion with MKL in the final.