Big thanks to everyone who attended our Annual Awards Night last Friday. Special mention must go to the Social Committee of Sharon O Grady, Linda O Donoghue,  Patricia Boland, Orla Culloty and Desiree Crowley who did a marvellous job. MC Brian O Luanaigh  did a great job keeping the night flowing with the help of Club Vice Chairman Liam McGuire, Congratulations to all  our Award and Special Acknowledgement winners. Special thanks to MEP and former President of the GAA Sean Kelly who presented our victorious Ladies team with their County league medals. Thanks also to the families of our Award Sponsors, namely the Lynes, the O’Grady’s, the Trants, the Coopers and the Horgans and to all who provided sponsorship and contributed raffle prizes . Finally as usual the Management and Staff of the Killarney Avenue Hotel pulled out all the stops to help the night run smoothly.

Our U17 boys made the trip to Duagh in the latest round of the County League and they came away with the win thanks to a fine second half performance. With the sides tied at 1-9 each at half time the lads hit 2-6 in the second half to come out on top in a high scoring encounter by 1-19 to 3-15.
TEAM..
Owen Murphy, Daniel Fleming, John O’Grady, David O’Brien, Liam Cronin, Brian O’Sullivan, Luke Courtney, Josh Bowler, Tom Benson, Daire Murphy, Eoghan Crowley, Jason O’Sullivan, Oisin Fleming, Alex O’Callaghan, Eanna Kearney
The U13 County League got underway with a trip to Listry as we faced Keel / Listry in the opening round for both our Green and White teams. The Green team, in Division 1, played very well in what is always a difficult place to get a win. Leading 5-4 to 0-7 at half time the defence had to be stern in the second half in the face of a strong comeback but we ran out winners on a 5-11 to 2-12 scoreline.
Our White team also had a successful night as they came away with a great win. The big plus was all 22 players got a game and all played their part . The White team are in Division 9 and it’s a great opportunity for the younger players to gain experience of playing if underage again next year.

Our U16 Ladies team shared the spoils with Corca Dhuibhne in their Division 3 tie played back west last Monday evening. A real nip and tuck affair it looked like the hosts were set for victory when leading by four with 2 minutes remaining but a strong finish saw us grab a hard earned draw. They continue their tour of Kerry with a spin to Ballybunion to play Beale in the next round.
Our U14 Green team kept up their fine early season form with a fantastic victory over Churchill. Displaying all the skills they ran out 2-7 to 0-3 winners and next up is a trip to Farranfore to play Firies this Sunday April 3rd.
The U14 White team had a local derby with neighbours Spa and took a slender lead into the break. Spa put in a strong second half showing and just ran out winners on a 1-10 to 1-8 scoreline.

Sean Murphy and his team are delighted to announce that our Annual Golf Classic is back with a bang with Friday May 6th pencilled in as the date. What an opportunity to play on one of Ireland’s most picturesque courses, the famed O Mahonys Point, and in the process raise money for the Club. Keep an eye out in our notes and social media in the coming weeks for details. 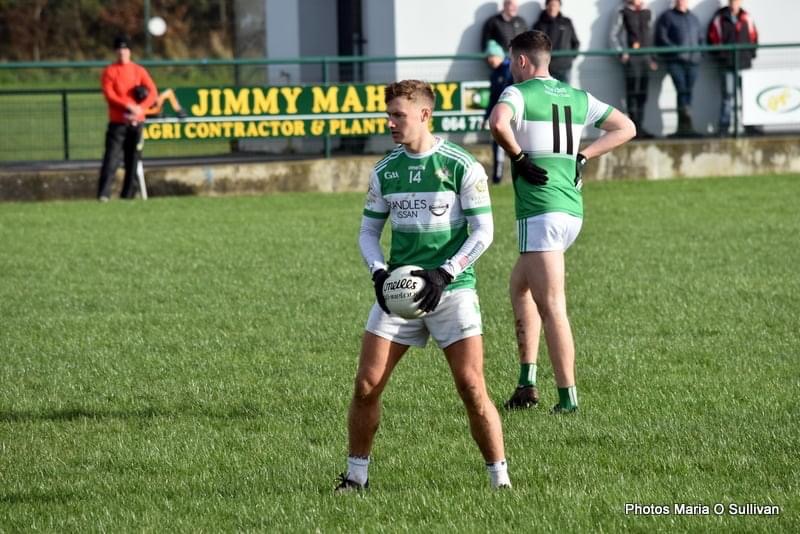 The old adage “goals wins games” could be applied to this opening round clash in the Credit Union Senior County League played on a resplendent and floodlit Direen sod Friday evening. That it was the visitors, Kerins O Rahillys, that struck for the majors meant that the home side came out of the game empty handed but the Killarney Legion forwards may well have had a rueful smile as a combination of bad luck and good goalkeeping saw the Narries net remain intact. The crossbar was shaking after Thomas Moriarty’s thunderbolt, Luke O Donoghue saw his parried shot strike the far post while Robert O Connor pulled off a superb reflex save from Finbarr Murphy.  Kerins O Rahillys slotted home two goals midway through the opening half, the first from the penalty spot (after a foul on Tommy Walsh that the Legion defence would probably debate) and the second, a neat finish from Conor Hayes.
It was Hayes who got the opening point but that was soon cancelled out and raised by the prominent Finbarr Murphy and James O Donoghue. Jamie O Sullivan and Gary Savage exchanged points before Rahillys goal rush gave them a four point lead, 2-2 to 0-4. But credit to the homeside they responded well through Thomas Moriarty, Jamie O Sullivan, Denis Sheahan (Mark), James O D and Finbarr. Barry John Keane and Shane McElligott kept O Rahillys in the conversation and when the half time whistle was blown by Padraig O Sullivan the sides were as they started,level, 0-10 to 2-4.
The game swayed the Blues way early in the second half as they opened a four point lead with scores from Hayes, Keane and the impressive Tom Hoare. Unfortunately this coincided with a sloppy spell for Legion in front of the posts as a couple of scorable chances were passed up. This period gave O Rahillys the cushion which they never relinquished despite the best efforts of James O Donoghue and Finbarr Murphy.
The next round sees us make the short road trip to Spa this weekend for a local derby and two precious League points at stake. Throw in is 5pm on Saturday April 2nd.
TEAM..  1. Brian Kelly 2. Sean McCarthy 3. Danny Sheahan 4. Cian Gammell 5. Peter O Sullivan 6. Jonathan Lyne 7. Darragh O Doherty 8. Darragh Lyne 9. Jamie O Sullivan (0-3)  10. Finbarr Murphy(0-4)  11. Podge O’Connor 12. Denis Sheahan(0-1)  13. Thomas Moriarty(0-1)  14. James O Donoghue(0-6)  15. Luke O’Donoghue(0-1)
Subs used Chris Davies, Shaun Keane, Sam Benson.
Rest of Panel… Aaron O Sullivan, Cathal Sheahan, Rob Leen, Evan Smyth, Stephen Flattery, Kieran O Donoghue