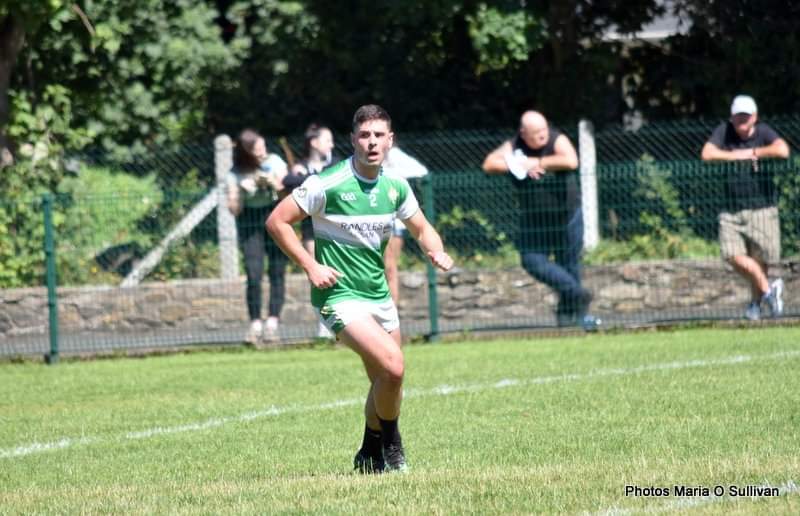 Our Senior Men got their Intermediate Club Championship bid off to a winning start overcoming a lively and gallant Laune Rangers side in splendid sunshine in Beaufort . Although victorious there were still enough wrinkles to iron out in the weeks ahead but as with all Championship an opening day win is imperative.

Peter McCarthy got the ball rolling with the opening score and this was shortly followed up by a Jamie O Sullivan free. Fielding a youthful forward line it was then the turn of Will Shine to make his imprint. Good pressure on a short Rangers kick off saw the ball fall to the Kerry U20 and spotting the keeper in an advanced position he coolly lobbed the ball to the net from 35 yards.
This served to jolt the Killorglin men into action and John Thyther, Eoghan Hassett and Fiachra Clifford got their names on the scoresheet. Cian Gammell then intercepted another kickout and burst through to score left footed. Ryan O Grady and Jamie O Sullivan from placed balls drove it on with Callum Moriarty replying before Cian Gammell, operating at midfield , used all his speed and power to fist over a fine score. Cian alongside the immense Padraig Lucey were holding court at midfield against a Rangers side missing the injured Peter Crowley. The bright Will Shine had the last word, or two, of the half with a double from play. Half time score Killarney Legion 1-9 Laune Rangers 0-5.
Rangers, always a proud championship club, were not going to go down without a fight and so it proved  as Eoghan Hassett(2), Jack O’Connor and Eoin O’Sullivan shot four without reply. James O Donoghue , introduced at half time, stopped the momentum with a pointed free and then Luke O’Donoghue with a massive impact off the bench hit two in a row to open up a six point gap again, 1-12 to 0-9. Fiachra Clifford swung over another for the Rangers before the pivotal moment of the second half arrived. Brian Kelly pulled off a tremendous save but still needed the intervention of Cathal Sheahan( who was outstanding all through) to clear it off line. In the next attack a long searching ball from Padraig Lucey found Ryan O’Grady and he finished to the net with some aplomb. That served to seal the game but credit to the Rangers they balled on through points from Eoghan Hassett and Fiachra Clifford. Luke O’Donoghue struck again, this time off the right, and Will Shine put the gloss on the scoreline with a tremendous point. The Legion spirit was typified near the end with Jonathan Lyne going full length on the boot of a attacker to foil another attack and the final score read 2-14 to 0-14; The next game in the competition is the weekend of August 13/14 where we will face either John Mitchels or Dromid Pearses.
Team.. Brian Kelly, Cathal Sheahan, Rob Leen, Peter O Sullivan, Darragh O Doherty, Danny Sheahn, Jonathan Lyne, Padraig Lucey, Cian Gammell(0-2), Peter McCarthy(0-1), Will Shine(1-3), Jamie O Sullivan(0-3), Ryan O Grady(1-1), Thomas Moriarty, Sam Benson.
Subs ..James O Donoghue(0-1) for Sam Benson, Luke O Donoghue(0-3) for Thomas Moriarty, Denis Sheahan for Rob Leen, Conor Keane for Peter McCarthy

Hard luck to the Ladies who were beaten by All Ireland Champions Meath in last Sunday’s decider. Despite getting off to a dream start the experienced and more physical Meath team eventually wore them down to run out winners. They can feel very proud of their years efforts and getting back into the All Ireland conversation must be their goal for the seasons ahead.

Our Saturday Morning Academy has taken a little sojourn for the month of August to give both coaches and participants a chance to recharge their batteries. But fear not we will on the first weekend in September where all boys and girls from age 4-11 will be welcome to enjoy the basics of Gaelic Football in a fun and safe environment.

Once again crowned U21 County Champions the District side had to fight tooth and nail to overcome a determined North Kerry side in Austin Stack Park last Wednesday evening. Peter O Sullivan lined out at corner back for the entire game, the hour plus extra time while Ryan O’Grady leading the attack on the forty kicked three points. Will Shine, a half time substitute, contributed a vital point while Darragh Fleming was introduced midway through the second half. Kieran O Donoghue was also part of the panel which eventually got the better of North Kerry on a 1-11 to 3-14scoreline.

Hard luck to our U15 White team who lost out to Scartaglin in the East Kerry Division 5 Final last evening in Spa. A slow start saw us fall behind early on but the middle 20 minutes of the game saw us dominant and left us only a point in arrears. The last quarter was nip and tuck but Scart slipped in for one last goal to seal the game.
Full Time..Killarney Legion 3-14, Scartaglin 5-14.

The very best of luck to our Senior player Jamie O Sullivan and his wife to be Bridie Kennelly as they celebrate their big day this Saturday August 6th. We wish them well both for the day and the future.