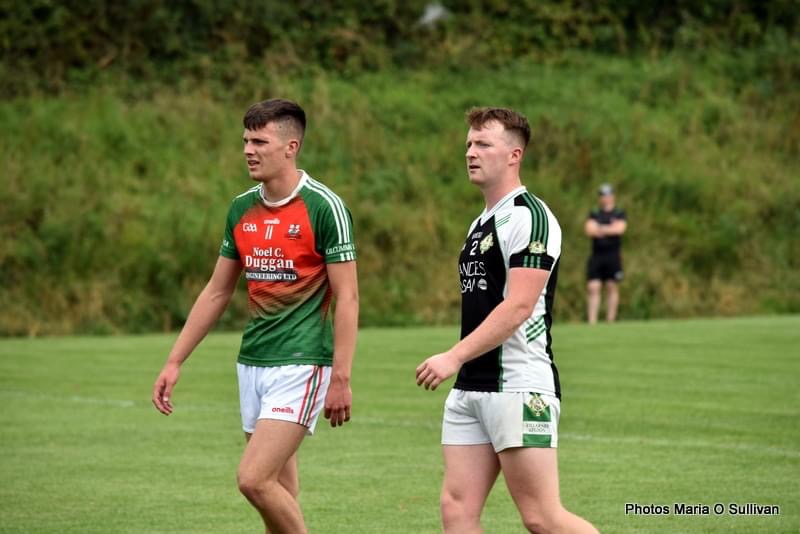 Our Senior Men advanced to the last four of the Kerry Petroleum Intermediate Club Championship after a hard fought win over Kilcummin in the quarter final in front of a bumper crowd in an immaculate Direen. With little or no wind and benign conditions the stage was all set for a cracking game and while the play was scrappy at times it was always interesting and the Legion management team will be delighted to negotiate what is always a stern examination against our East Kerry neighbours.

Brendan Kealy got the opening score of the game when Kilcummin won a free almost direct from the throw in and his long range free sailed over. Darragh Lyne got the Legion show on the road with a point from play, soon followed by a point from Jamie O Sullivan and a marvellous effort from Conor Keane. Kieran Murphy clipped over for Kilcummin before James O Donoghue got the score of the day, of any day, with a sublime effort from the sideline. His next effort, though not as spectacular, was of equal importance and value and saw the score stand at 0-5 to 0-2 . Kieran Murphy clocked up another one for Kilcummin as did Kealy, again from a free as the Legion forwards lost their way slightly. Noel Duggan got the final point of the half to leave the sides level as they retired to the dressing room, 0-5 to 0-5.
William Shine was introduced for the second half in place of Ryan O Grady and Jameso shot the opening salvo of the second period from a placed ball. He followed it up with one from play thanks to a smooth assist from Conor Keane. Will Shine made it 0-9 to 0-5 thanks to strong approach work from Darragh Lyne and a seminal moment in the game was to follow. Kilcummin worked the ball through the hands and it found Noel Duggan with a goal in his sights. His shot beat Brian Kelly but not the retreating Cian Gammell who pulled off a stunning goal line clearance. Brian Kelly smothered the follow up and although Kilcummin did score, through a Noel Duggan free, it was a small price to pay courtesy of some good defending. Up the other end Cian Gammell stampeded forward to kick a beauty and when Jamie O’Sullivan put over a free to make it 0-11 to 0-6 it came at a cost for Kilcummin with skipper Gary O Leary dismissed . Noel Duggan kept Kilcummin in the conversation with another score but the man advantage played right into the home side’s barrow and further points from Jameso and Jonathan Lyne put a healthier complexion on the scoreline. With Kilcummin pushing for a much needed goal they inevitably left gaps at the back which were exposed as Brendan Kealy was left isolated with two forwards incoming. Jameso laid the ball off to Thomas Moriarty who flicked to the net to put the gloss on a well deserved win. When referee Paul Hayes blew his whistle for the final time the scoreboard read Killarney Legion 1-13 to Kilcummins 0-8.
TEAM..Brian Kelly, Darragh O Doherty, Rob Leen, Peter O Sullivan, Cian Gammell(0-1), Danny Sheahan, Jonathan Lyne(0-1), Padraig Lucey, Darragh Lyne(0-1), Luke O Donoghue, James O Donoghue(0-5), Denis Sheahan, Conor Keane(0-1), Jamie O Sullivan(0-2), Ryan OGrady.
Subs.. Will Shine(0-2) for Ryan OGrady, Thomas Moriarty(1-0) for Denis Sheahan, Peter McCarthy for Luke O Donoghue, Shaun Keane for Jamie O Sullivan.