The Club extends its sympathies to the family of Robert( Robbie) O Brien who passed away last weekend. While the involvement of Robbie’s family in the club today is well known, what may not be common knowledge is that Robbie himself was an outstanding footballer for the club in his day. He won an East Kerry Minor Title beating Rathmore in the final in 1958 and in the very same year he lined out for the senior team in the O Donoghue Cup Final against town rivals Dr Crokes. He established himself on the senior team thereafter and played a starring role in the 1960 County Championship run which culminated in a defeat to Feale Rangers.
Unfortunately a bad accident put pay to his football career but he remained a  Legion man at heart. Having attended and played football also at St Brendans College he worked in the family Building business until he decided to train as a teacher. He then found himself back at his alma mater after spells in Dublin and Castleisland ,and taught at the famed school until his retirement. A number of club members would have known Robbie as Mr O’Brien in the Sem but what always shone through was the duty of care he gave to every student. He also was involved in training numerous of the Colleges football teams, most notably the 1986 Corn Ui Mhuiri title. and it was obvious in many of the tributes paid to him that he was held in very esteem.
Never a man to rest on his laurels he went down the College road again in later life and graduated with a degree in law the same day as his daughter Lara.
Robbie’s brother ,the late Noelie , also lined out for the Club, winning an O Donoghue Cup medal in 1967. Back to the present day Lara is the current Club Secretary, another daughter Noelle coaches the U14 Girls team. Sons in law Liam O Toole and Shane McSweeney also coach at Juvenile level while all his grandchildren, namely David, Kate, Lauren, Millie, Briain, Darragh, Erin and little Charlie Mae, are all staunch Legionnaires.

Congratulations to our fellow East Kerry clubs Fossa and Rathmore on capturing their respective Junior and Intermediate Munster titles over the weekend in Mallow. Not forgetting Kerins O Rahillys who were successful in annexing the Munster Senior title with a win over Newcastlewest in the same venue. Best of luck to all three sides in their quest for All Ireland glory. 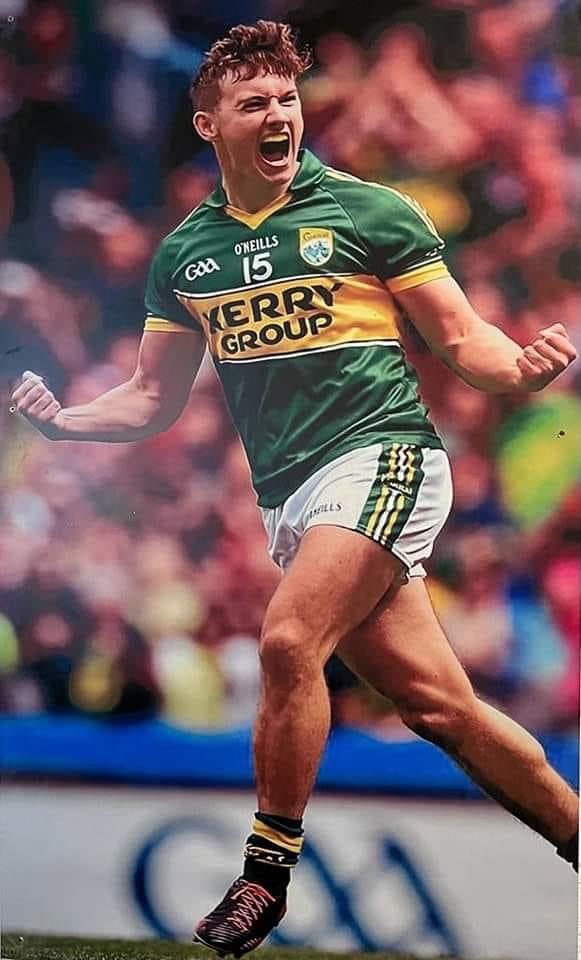 For anyone familiar with the environs of the dressing room area in Fitzgerald Stadium they will be aware that the walls are adorned with portraits paying tribute to Kerry players, past and present. The latest addition to the walls of fame is our own James O Donoghue who had the honour of being the 2014 GAA/GPA Footballer of the Year. It is nice to see James being hailed in the same exalted company of legends of the game.