The U7 Go Games kicked off on Sunday morning in a sunny Direen as Ballymacelligott called in for a run out. Well done to our 27 kids who put in a great shift on a perfect morning .

The U9 and U11 continued their series this past week with the U9s travelling to Pairc Eamon in Farranfore to meet Firies while the U11s were in Rathbeg and played Rathmore. A nice introduction for the young players to game scenarios without the added onus of it being competitive. The skills on show and the smiling faces are all the ingredients of an enjoyable evening.
In what can only be described as a humdinger of a game the U15 Boys went down to a very fluent Kenmare Shamrocks team in the County League Division 1 semi final played in Fr. Breen Park. It was a see-saw battle in which the home side took control early but credit where it’s due the boys in green and white kept plugging away and actually led by two points midway through the second half. But  the Shamrocks got their noses in front by the full time whistle to run out 8-10 to 7-10winners. There was huge honour in defeat and to be ranked amongst the top four clubs in the county is something to be proud of but also a target to maintain and improve on in years to come.
Team… Joshua Alade, Bryan O’Connor, Cian Scannell, Darragh Moynihan, Luke Courtney, Cillian Murphy, Ronan Fahey, Bryan Walsh, Max Coyne, Evan Cox, Eoin Murphy, Aindí o’Cathasaigh, Finan Blackwell, Oisin Fleming, Kevin Looney, Mark Looney, Tom Purcell , Eli Anderson, Senan Cotter, Killian O’Callaghan, Jack Culloty, Eoghan Prendergast, Sean Pierce.
The U17 Boys kicked off their East Kerry Minor League bid with an impressive win over Currow last Monday, May 9th, on the scoreline of 4-20 to 2-12. The League continues on Monday nights  and they will also play Cordal/ Scartaglen, Gneeveguilla, Beaufort and Fossa.

In what is always a very worthwhile exercise the U10 Girls stepped out of Saturday mornings in Direen and went on the road, albeit a short journey to Lewis Road, to play our neighbours Dr Crokes last Thursday. Their coaches were delighted with the workout where again the emphasis is on enjoyment and getting their skills into use in a fun environment.
Our U14 ladies Green team are celebrating this week after clinching the Division 3 shield defeating Churchill in John Mitchell’s GAA complex. Playing against a very stiff breeze in the first half but they were quick out of the traps to take a 2-5 to 1-0 lead.  Churchill started the second half stronger, coming into the game more but our girls knuckled down again to kick on and finish the game out winners. Final Score Legion 2-10 Churchill 1-03.
Team captain Eva Spellman, granddaughter of Weeshie Fogarty, accepted the shield from County Board Chairperson Selina Looney. 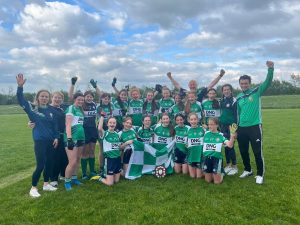 The Minor Ladies had the latest  installment in their always competitive rivalry with neighbours Kilcummin with both vying  for second place in their Division behind MKL Gaels. A tight and cagey second half saw them lead 1-9 to 2-2 at half time. Played in Direen, the visitors started the second half strongly and narrowed the gap to two points early but a goal rush from the Legion attack sealed the win by 6-11 to 3-10.
Team..1. Amy Walshe, 2. Ciara O Neill, 3. Ciara Doolan, 4. Isabelle O Connor, 5. Grace O Connor, 6. Andrea Murphy, 7. Eabha Stack, 8. Aisling Cahill, 9. Chloe Hue, 10. Emma Horan, 11. Lucy Spelman, 12. Orianne McGillicuddy, 13. Caelyn O Grady, 14. Aine Devlin, 15. Amy Doyle , 17. Becci Fleming, 18. Ally Casey.
The Senior Ladies continued their Donal Curtin Cup campaign when they welcomed Inbhear Sceil Gaeils to Direen on Sunday morning. Two early goals from Mairead O Donoghue and Isabelle Corridan and three points from Mairead  saw them trail by 5 points at half time. With the wind to their backs the Ladies came out all guns blazing in the second half and helped by accurate shooting from Ciara Randles and Andrea Murphy they mined a draw , displaying some great intensity and resilience. 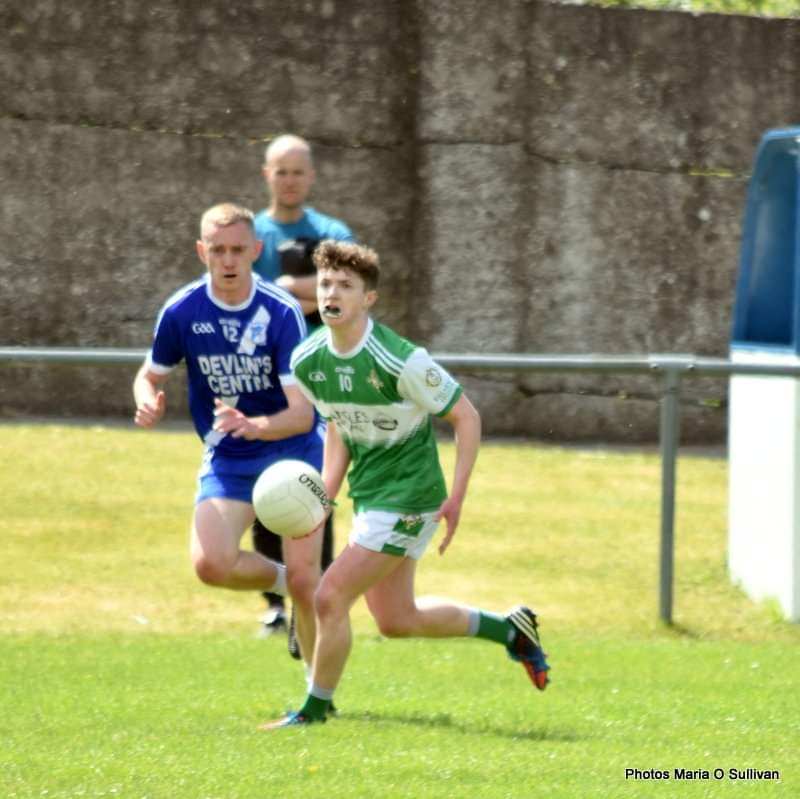 On a perfect day for football our Seniors travelled south to Con Keating Park where St Marys lay in waiting in Round 6 of the County Senior Football League. Having won their last two games in the League this encounter was viewed as a vital one in order to maintain that momentum. And by the hours end and after an emphatic win the League table certainly looks a bit healthier. Final Score St Marys 0-11 Killarney Legion 1-22.
TEAM..Team. Brian Kelly, Cathal Sheahan, Rob Leen, Peter O Sullivan, Darragh Lyne, Danny Sheahan, Jonathan Lyne, Padraig Lucey (0-1) Finbarr Murphy (0-2) Sam Benson (0-5) Denis Sheahan, Luke O Donoghue, Thomas Moriarty (0-3) Jamie O Sullivan (0-3) James O Donoghue (0-3)
Subs used: Will Shine (1-02), Ryan O Grady (0-1) Peter McCarthy (0-2) Stephen Flattery.
Before the game a minute’s silence was held in memory of the late Mary Kelly and special mention must go to Brian Kelly who was his usual consistent self after the toughest of weeks.
The Division 6A game between Killarney Legion and Tuosist did not go ahead as scheduled.

Firstly it is great to see one of our Lotto Coordinators Dan Joe Lynch back in harness after a spell of inactivity. His work was certainly missed.
Sunday May 8th
Numbers were 15, 19, 22, 28 Bonus Number 9
No Jackpot winner
Match 3 winners
1. Eoin Carroll
2. Christian Somers
3. Alan Clark
4. Anne and Sinead Fagan
5. Philip Gammell 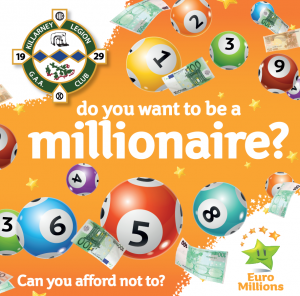