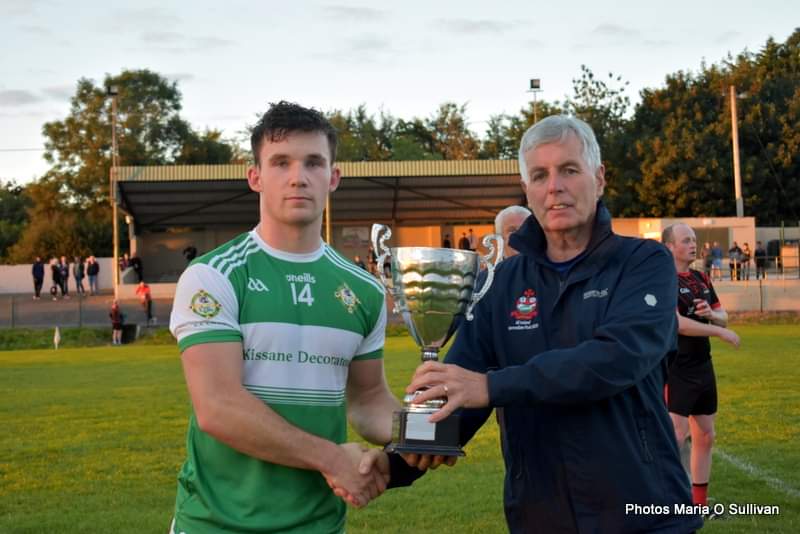 The Senior B team added the Mc Elligott Cup to the trophy collection following a comprehensive win over Fossa in the competition showpiece played in Kilcummin last Friday evening. With the regulations for the competition allowing more flexibility for team selection a strong line was available. Luke O’Donoghue showed his ability once again plundering 1-4 while Finbarr Murphy enduring an injury interrupted couple of months was in fine form accounting for five of his sides total. Young guns Callum O’Donoghue and Jamie Alade showed the benefit of playing and training at this level and are marked out as future senior players.
Gaining control of the game from the onset four points evenly shared by Luke O’Donoghue and Finbarr Murphy allied to a dominant defensive opening set them on their way and it wasn’t until the 23rd minute that Fossa opened their account. Denis Sheahan, lining out on the 40, swung over a point soon followed by another Fossa point but Finbarr Murphy had the last word of the half , seeing Legion lead 0-7 to 0-2 at half time.
Conor Keane slotted over his first and only point early in the second period and although not scoring heavily he was very instrumental when getting on the ball and bringing others into the game. A nice piece of quick thinking from a free saw Luke O’Donoghue net a fine goal and the man of the moment followed that up with two further points. Fossa replied in kind with two points but Shaun Keane, controlling the middle sector, got his name on the scoresheet before fellow midfielder Jamie Alade rattled the back of the net to leave Legion in an unassailable 2-11 to 0-4 lead.
Fossa to their credit continued to play with pride and kept the scoreboard ticking over before Finbarr Murphy closed the scoring at 2-12 to 0-6. With the game in hand it afforded the Legion management team the opportunity to run the bench and some deserving minutes for squad members. After the full time whistle Captain Luke O’Donoghue received the Mc Elligott Cup from Mike O Riordan of the host club.
Team Robert Osborne, Daniel Carroll, Sean McCarthy, Callum O’Donoghue, Dara Fleming, Kieran O’Donoghue, Alan Moriarty, Shaun Keane(0-1), Jamie Alade(1-0), Cian Sheehan, Denis Sheehan(0-1), Owen Benson, Finbarr Murphy(0-5), Luke O’Donoghue(1-4), Conor Keane(0-1).
.Subs Bryan Griffin, Gavin Moriarty, Ian Prendergast, Callum O’Grady, Tom Cronin, Donnacha Warren and Colm O’Cuiv.
Well done to the Management team of Donal O Donoghue, Mike Pigott, Conor McNeice, Mark O Leary and Michael B. O Donoghue who added this trophy to the Division 6 Shield won earlier this season. No rest for the wicked they face Glenflesk in the opening round of what is always a competitive East Kerry O Sullivan Cup this Friday evening September 23rd at 6pm in Direen.

The Minor Ladies followed up their opening East Kerry League win over Beaufort with a very solid and hardworking win over Kilcummin. The two sides have a rivalry borne out of a history of close and engaging battles and with only two points between the sides in Legion favour at half time another nervy half of football was expected. But credit to the Legion girls they probably produced their best half hour of the season as they ran out winners on a comfortable scoreline. They now face MKL Gaels in the next round, due to be played in Direen this Friday September 23rd.

Congratulations to our Club Secretary Lara O’Brien who was very successful when taking part in Today FMs Radio Cash Machine competition. A sharp operator, she proved her prowess when called by the radio station and in the process won a cool 23,544.93 Euro. But in an ultimate act of generosity she donated half her winning to a charity close to her heart, the always worthy Kerry Parents and Friends. Take a well earned bow Lara!!

Our Under 7 boys were in Milltown on Saturday morning
to take part in a blitz featuring the hosts Milltown/Castlemaine, Firies and John Mitchels. Each club fielded three teams and got to play 3 games each. The lads played with great skill and teamwork and all the games were keenly contested and most importantly very enjoyable.Big thanks to Ian Twiss and everyone in Milltown/Castlemaine for hosting and John Mitchels and Firies for a great morning’s work. 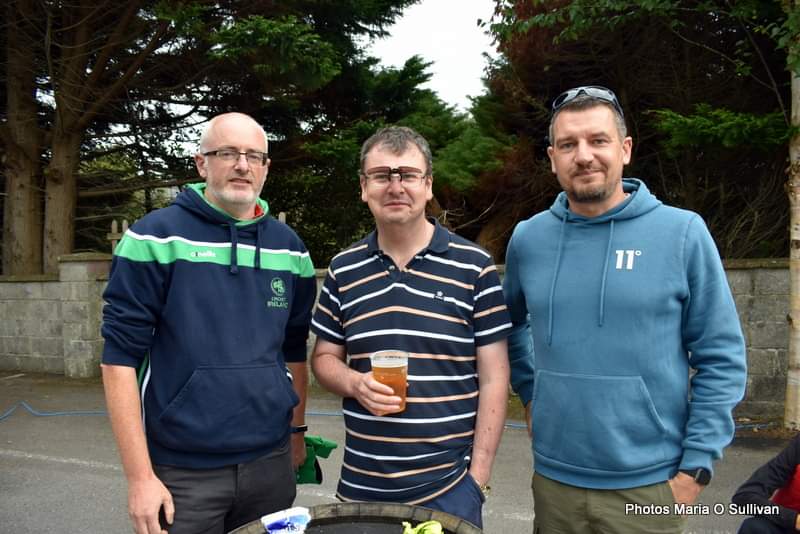 What a wonderful afternoon we had for our Club Barbecue with the weather behaving itself and a great time had by all. Social committee Chairperson Sharon O Grady was extremely grateful to Timmy O’Donoghue and his family Ber, Paudie, Luke and Sue for the work they put into the day. Also the chefs Kevin(Timmy’s brother) and John, as well as Desiree, Orla, Denise and Catherine who were the commi chefs. Chairman Dave Randles for the tables and chairs, the bartenders Sarah, Eoghan and Eve, Linda and Donal for the teas and coffees, Patricia for the face painting, Hannah and Caroline for organising the dancers, Donal and Timmy for having the dance floor, Brian Looney and Lara for the beats and mic duty, Treasurer John Foran and President Tommy Regan for having the facilities in tip top shape. John Doona was a helpful shopkeeper while snapper Maria O Sullivan captured it all. It was a magnificent collective effort by all the committee who spent the days before having everything in place. Thanks to Tim Jones for supplying the beautiful meat and the aforementioned Timmy for the beer supplied by Killarney Brewery. And on a beautiful autumn day the ice cream from Muckross Creamery was a huge hit.