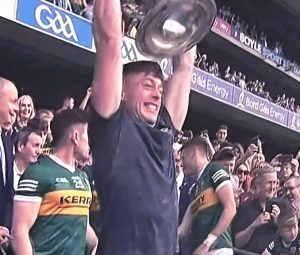 What a wonderful occasion as Kerry captured their 38th All Ireland title with a 0-20 to 0-16 win over Galway in Croke Park. David Clifford gave a performance for the ages, mirrored by Galways Shane Walsh as Jack O Connors men finished the stronger. Cian Gammell will no doubt have gained valuable experience being part of the panel and hopefully will be able to push on next year and challenge for a place in the team. Congratulations to Cian and with youth on his side the future is bright. 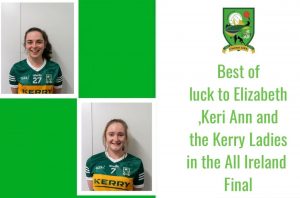 The double could well be on and so we wish
the very best of luck to Elizabeth Mohan , Keri Ann Hanrahan and the Kerry Senior Ladies football team as they bid for All Ireland glory against Meath this Sunday in Croke Park. Having last won the title in 1993 they will be bidding to end the 29 year famine against the reigning All Ireland champs.

The scoreline in the end was harsh on a gallant Legion team but there would be little disputing the fact that Kenmare were the better team overall in this East Kerry U15 Division 1 League Final played in FItzgerald Stadium. But with ten points left on the clock, and the scoreboard reading 2-12 to 1-9 in Kenmare favours there was still a whiff of a chance. But three rapid fire goals put more of a gloss to it, but it shouldnt detract from what was a game and competitive Legion side.

It started well when Oisin Fleming, who accounted for 1-8 of his side’s total, opened the scoring with two points before a Kenmare goal and points raced them into the lead. It could have been more but for a fine full length save from netminder Joshua Alade.
However Kenmare then asserted their authority for the rest of the half , running up 2-8 to Legions 0-5. Legion needed a quick start to the second half and it duly arrived thanks to a point from Oisin Fleming and a cracking goal from centre forward Brian O Shea. But everytime they got within touching distance Kenamre hit a flurry of points. However by the 50th minute and still in the game Kenmare struck for those killer goals and eventually ran out winners on a 2-9 to 5-13 score.
The team and management should be very proud of their efforts so far this year. A look at the County League results would see them rank in the top 4, while runners up in East Kerry’s top Division has them nicely placed in the next year or two to progress and continue to improve through to the minor ranks.
That we are also fielding two teams at this age group is another huge positive and with the other team contesting another East Kerry final this week, there is a lot of football being played and everyone is getting plenty of game time.
Well done lads, stick with it and better days lie ahead!!
Team.. Joshua Alade, Bryan O Connor, Cian Scannell, Luke Courtney, Cillian Murphy, Ronan Fahey, Fionn O Donoghue Sheehan, Aindi O Cathasaigh, Max Coyne,  Evan Cox, Brian O Shea, Finan Blackwell, Oisin Fleming, Dara McCarthy, Mark Looney.
Sean Pierce , Tony Daly, Jack Culloty, Tom Purcell, Eli Anderson, Senan Cotter, Adam O Neill. Kevin Looney, Mark Looney, David Courtney, Eoin Murphy, Killian O Callaghan, Eoghan Prendergast, Darragh Moynihan, Declan Grimes, Matthew Hegarty, Joseph Hurley Lyne, Dara O Connor, Samuel Scroope, Jack Culloty
Management..Donal Culloty(Manager), John Keane, Donal Hegarty, Nigel Shevlin(Selectors)

Our Senior Men open their County Intermediate Championship bid with a clash against Laune Rangers which is being played in Beaufort on Sunday July 31st at 2-30pm. Laune Rangers had a very solid campaign in Division 2 and have a long and proud tradition as a Championship team of some renown. Nothing less than 100% will suffice in this most competitive environment. Dromid Pearses will face John Mitchels in Glenbeigh in the other game in the group, which will be held in Glenbeigh on Saturday August 6th at 7pm.
The Senior B Team concluded their East Kerry Junior League campaign with a 4-13 to 2-7 defeat to Gneeveguilla in Direen. It’s been a particularly busy month with games galore and there is still more to play for. The O Sullivan Cup will be scheduled in the coming weeks and we have a home tie for Glenflesk in this prestigious competition. 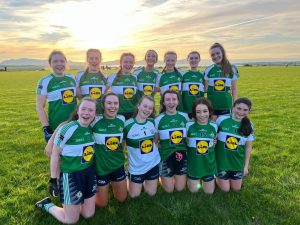 John Mitchels Sports Complex was the venue on Thursday last for our U16 team where they faced Firies in the County League Division 3 Final. The Farranfore side made the brighter start but gradually as the half wore on our girls got into their rhythm and only trailed by three points at the break. Again Firies made a better start to the second half and built up a lead that couldn’t be surmounted and eventually ran out 7-10 to 4-9 winners. The ladies played with great commitment and when they look back at the overall campaign it will be with a sense of satisfaction overall.

Our brand new scoreboard is now up and running in the Club grounds thanks to the work of our Field and Facilities committee. Digitally operated and easy to use it will be a welcome addition when hosting games. Special thanks to Donal Dodo Hegarty and the various craftsmen whose diligence made the project happen. 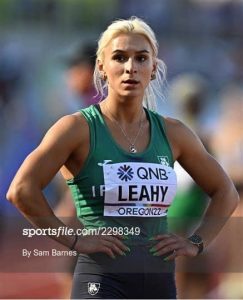 Congrats to Sarah on her selection on the Irish women’s 4 x 100m Relay team at the World Athletics Championship in Oregon. Racing last Friday night, what a fantastic honour to represent her country on the world stage. Be very proud Sarah because the whole club is proud of you.

The Club would like to wish Mark Moriarty all the very best on his ordination as a Deacon. Mark, whose father Brian served the club in many officerships and roles, is having his big day on Sunday August 7th at 3pm in St Mary’s Cathedral with light refreshments afterwards.