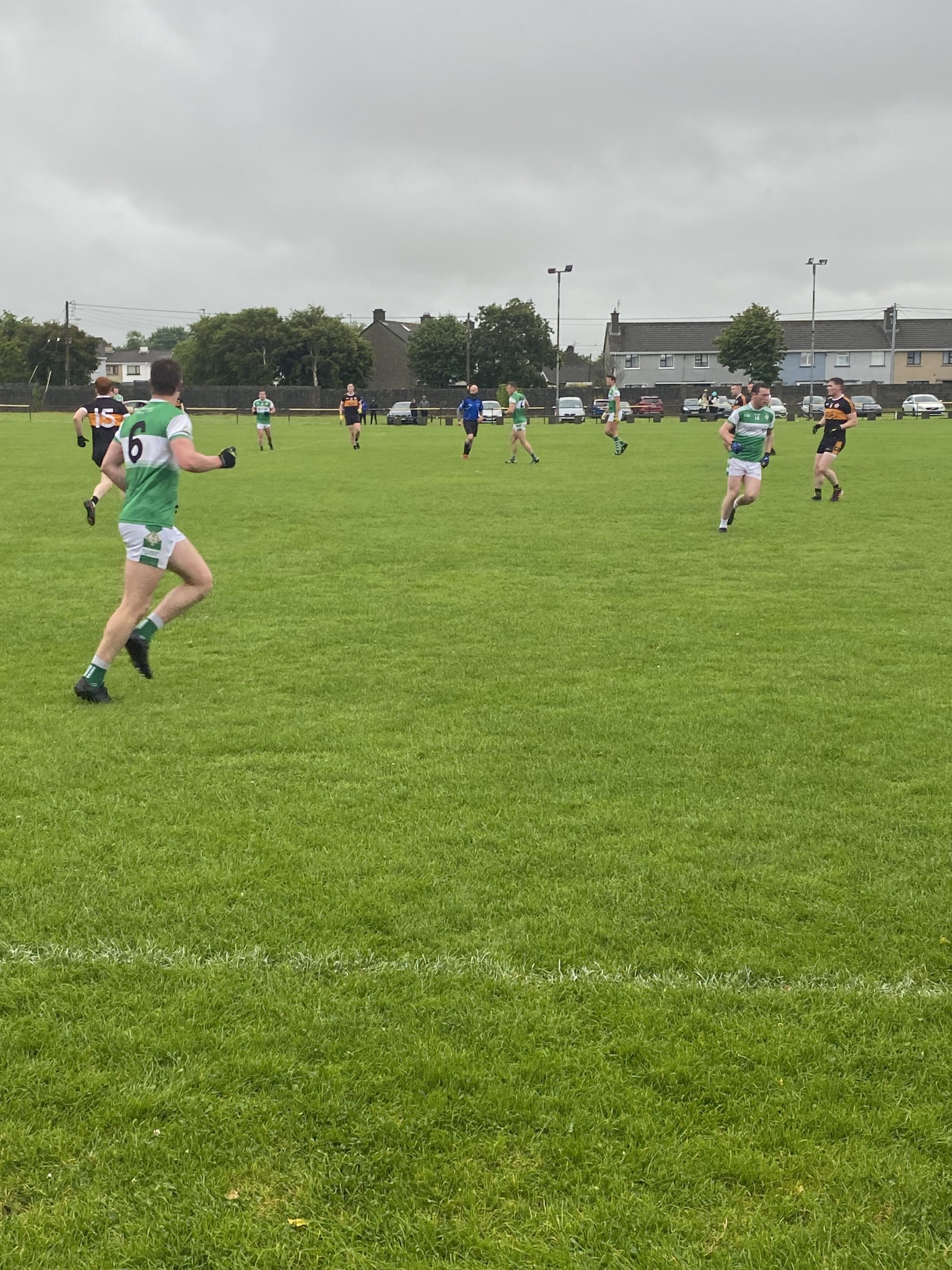 Killarney Legion 0-14 Austin Stacks 1-11.
Even the most ardent of Rockies couldn’t deny that the Killarney Legion senior team didn’t deserve something out of this interesting County League clash played in Connolly Park this Saturday evening. When  Austin Stacks corner forward Darragh O Brien stood over a last minute close in free his only focus was to hit the onion sack. He did so by launching a rocket which somehow managed to evade any sprawling Legion hands to find the back of the net and hand the home side an unlikely draw.
That the free was still awarded led to some debate amongst the not so knowledgeable in the crowd. Shane O Callaghan saw red for a clear strike in the immediate aftermath of the concession of the free by the Legion defence and all and sundry expected a hop ball as a result. But the free stood and the rest is history.
What wasn’t up for debate was the performance of the Legion team which was as gutsy as the days are long this week and arguably deserved the full points against the County Champions. Not for the first time this year James O Donoghue was the conductor of the orchestra and his five first half points saw Legion lead 0-8 to 0-6 at half time.
Points were shared in the opening minutes of the second half with Darragh O Brien kicking two free and James O D and Sam Benson responding. Finbarr Murphy kicked a free following a tenacious run by Sam Benson which Stacks centre back Ronan Shanahan replied to. Conor Keane made his first appearance of 2022 and proceeded to kick a worldie from the right wing and when Peter McCarthy slipped over a point from play followed by a James O D free a five point lead was in hand , 0-14 to 0-9. Darragh O Brien narrowed it to four with a free, while sweeper keeper Wayne Guthrie made it a three point game from play.
It looked like Legion would hold out for the points until the cruel intervention of the last minute goal. But that shouldn’t overshadow what was a massively encouraging display in the home of the County Champions.
The Senior B Team beat Dingle on the same evening. Points from Owen Benson(2), Matthew Horgan, Aaron Sullivan and Jack Enright from frees saw them lead 0-5 to 0-4 at half time. Despite Dingle levelling the game early in the second half the lads pushed on again thanks to Tadgh Doolan,  Bryan Griffin, Ian Prendergast and Jack Enright to run out 0-13 to 0-7 winners.

A splash of summer welcomed the Dingle/Annascaul/Castlegregory combination to Direen on Monday in  round 4 of the U14 County League. Our Green team got a firm grip on proceedings early on and hit the visitors for five first half goals. To their credit the Westerners battled gamely in the second half to strike for three goals themselves but the lead was insurmountable with Legion running out 8-11 to 3-7 winners. Moyvane will visit Direen next on Monday June 27th at 7.30pm.
The White team were due to travel to John Mitchels on Friday night but unfortunately the fixture fell foul to the inclement weather that prevailed that evening.
The Minor Ladies face Kilcummin in the County League semi final this Friday July 1st . Scheduled for Direen throw in is 7.30 but check social media channels nearer to date for any possible changes.

Congratulations to the Kerry Ladies on qualifying for the All Ireland quarter finals after defeating Westmeath in Fitzgerald Stadium last Saturday. Made all the better for the introduction of Elizabeth Mohan for her inter county debut and Keri Ann Hanrahan who was also in the match day panel.

Well done to the  Killarney Camogie Club U15 team who did so well at last weekends National Feile competition held in Co Meath with special mention to our own Holly McLoughlin and Clodagh Flanagan.

Our Mothers and Others group continue to train every Wednesday At 8pm. An ideal opportunity to learn a new skill and get to know people in Killarney, no previous football experience is required and it’s the perfect healthy social outlet. You can contact Blaithin at 087 6963979 for more details if interested.

The Go Games continued this past week. Our U9 boys were in Currow while the U11s entertained Glenbeigh/Glencar in Direen. Again these games are an ideal introduction to games in a non competitive fashion and a very enjoyable experience for all concerned.
The East Kerry U15 League kicked off last week. No game for our Green team but they are due to face Keel/ Listry on Wednesday June 27th at 7.30pm. The White opened up their campaign with a trip to Scartaglen. They put up a good showing against a strong home side before eventually succumbing 5-10 to 1-9 .

We would like to wish Senior player Jonathan Lyne the very best of luck this Friday July 1st as he meets his perfect match in Adrienne Brosnan. Adrienne, although raised in Glenbeigh, is also of sound Legion stock as her father Donal is a member of the Brosnan family, New Street who are steeped in the Club. We hope the new couple will have a very happy future together.