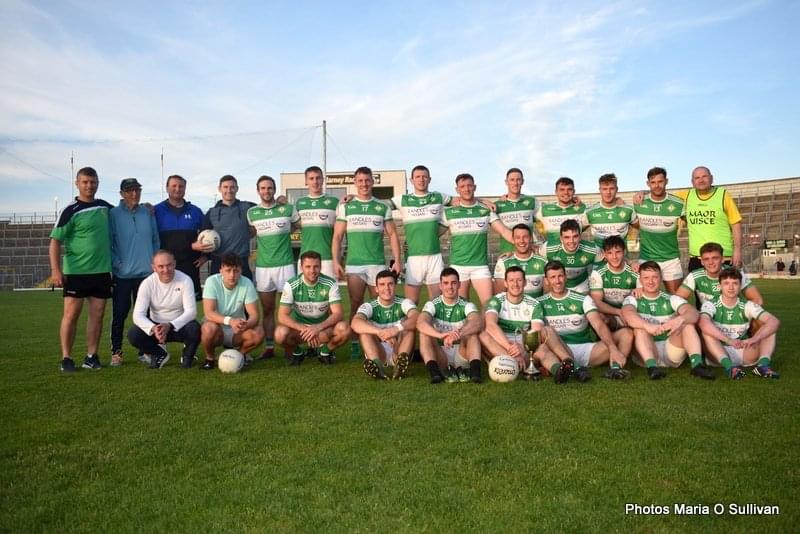 A late Conor Keane goal proved to be the difference in this highly entertaining East Kerry Superleague Final played in idyllic conditions on the lush carpet of Fitzgerald Stadium. With Crokes hanging onto a slender one point lead and playing keep ball inside their own 45 the pressure applied by a hounding Legion attack forced a turnover and the ball fell to Keane who hit an unstoppable shot to the Crokes net.

There was still time for another Crokes point but when referee Padraig O Sullivan blew his whistle for the final time the scoreline read in Legions favour 3-10 to 2-12.
The first half was a story of two quarters, the first owned by Crokes as points by Daithi Casey(2), Billy Courtney(2), Mikey Casey and Brian Looney saw them ahead 0-6 to 0-4. Jamie O Sullivan was prominent in the first half hitting four points but the pivotal score of the half was the result of some nice link up play by Thomas Moriarty and Ryan O’Grady with the former slotting home nicely into the corner. Although cancelled out almost immediately by a Daithi Casey strike, points by Conor Keane and Ryan O’Grady saw the teams retire to the dressing room with Legion ahead 1-8 to 1-7.
Thomas Moriarty picked off the opening score of the second period but when David Shaw intercepted a crossfield ball to race clear and slot home a fine goal Crokes suddenly found themselves in the driving seat again. Mikey Casey nudged them three clear but then Legion pounced for another goal. Peter O Sullivan set off on a mazy run and the ball found the careering Padriag Lucey in the D and he proceeded to hit a piledriver past Crokes netminder Brendan Falvey. Scores were at a premium in the next ten minutes as Jamie O Sullivan and Shaw traded points before Daithi Casey’s late run looked to have settled it. A feature of the last ten minutes was some loose play by both sides with some poor shooting but that shouldnt detract from what was a fine spectacle overall.
Just when it looked like the Crokes would hang on for the win, the late Legion turnover saw Keane pounce for the late goal which ultimately decided a fine contest. While the attack would be instrumental in the win scoring at vital stages it was also a very sound defensive display with cornerback Cathal Sheahan the pick of the sextet.
TEAM…Brian Kelly, Cathal Sheahan, Darragh O Doherty, Darragh Fleming, Peter O Sullivan, Danny Sheahan, Jonathan Lyne, Padraig Lucey(1-0), Jamie O Sullivan(0-5), Sam Benson, Conor Keane(1-2), Denis Sheahan, Thomas Moriarty(1-2), Peter McCarthy, Ryan O Grady(0-1).
Subs.. Finbarr Murphy for Sam Benson, Will Shine for Ryan O Grady, Luke O’Donoghue for Denis Sheahan