A HURLEY MADE FOR HURLING

Hurling is undergoing a rejuvenation in the town of Claremorris in Co. Mayo. Some ten years ago playing numbers were sparse, teams cobbled together with no long term future. An enthusiastic parent decided he was willing to put a bit of time into the Club and established an U8 team in the Club. Over that time the underage structures started producing a conveyor belt of young hurlers and now as a result of, today the Club are now fielding an adult team in the junior grade. The parent responsible for getting the ball rolling was David Hurley, formerly of Loreto Road Killarney.
David’s family are steeped in the club, his father Tim was a County Championship winner in 1946 while Uncles Davy Hurley and Jack were deeply involved. David himself played for the club all the way through the juvenile grades. He recalls fondly playing with the likes of the late Damien O Shea, Tom Moriarty, Peter Murphy and John Culloty. No mean player himself his football career was curtailed by illness but he also found time to play a bit of hurling with St Pats of East Kerry. He recalls playing alongside Johnny Culloty and remembers Mickey Culloty as a great influence. And it seems his taste for hurling hasn’t diminished in Mayo. His four sons, twins Niall and Dara, David Jnr and Mark all play for Claremorris with the twins also on the Mayo minor Football panel. David is very passionate about developing hurling in a predominantly football county but cites some great people involved in the promotion of the game in the County. David’s own love for the sport has been identified as he is currently serving as a selector for the U20 County team. His initial gra for hurling was inherited from his father Tim, who was a big fan of the Galway hurling team of the 80s, which won 3 All Ireland in that period.
So the next time you hear about the Kerryman sparking a hurling renaissance in his corner of Mayo, it’s not a joke. Hurley by name, hurling by nature.

The Tralee sides’ run in the Sigerson Cup came to an end with defeat to NUIG at the semi final stage in Rathkeale last Thursday, February 10th. Having trailed for most of the encounter and 0-11 to 0-6 down with 10 minutes to go in normal time, they staged a great comeback to bring the tie to extra time. Alas in extra time the Galway side pushed on again and eventually ran out winners by 3 points. Darragh Lyne started at left half back and acquitted himself very well while Ryan O Grady was introduced in the second half and showed a great industry. So hard luck to MTU Kerry after a great run in the competition as NUIG meet a David Clifford inspired UL in the final

The Club was delighted to be in receipt of 50,000 Euro in the latest round of the Sports Capital Grants which were announced last Friday. Under the terms of the grant, funding is provided to assist voluntary organisations such as ourselves to develop high quality and sustainable facilities and the Field and Facilities Committee are sure to put the funds to good use for future development in the Club. Although recently retired as the Committees lead a lot of gratitude is extended towards Pat Moynihan who has been responsible for the securing of grants for the club for many years. The facilities are certainly for every member to be proud of.

The Kerry Ladies got their National League campaign underway with a fine win over Tipperary in Fitzgerald Stadium. Kerri Ann Hanrahan and Elizabeth Mohan are both part of the Kingdoms panel and Kerri Ann made her senior inter county debut when introduced as a substitute in the second half . Well done to the two ladies and we’ll keep a close eye on their progress as the season goes on.

Our website has got a complete makeover, special thanks to PR Committee member Elizabeth Mohan who has put the finishing touches to a sleek new look. On it you can now expect to find all the latest News, Fixtures and Results, Pitch planner, Club Shop, pay your Membership, play the Club Lotto and a Coaches’ Corner with tips and information to help you along the way. 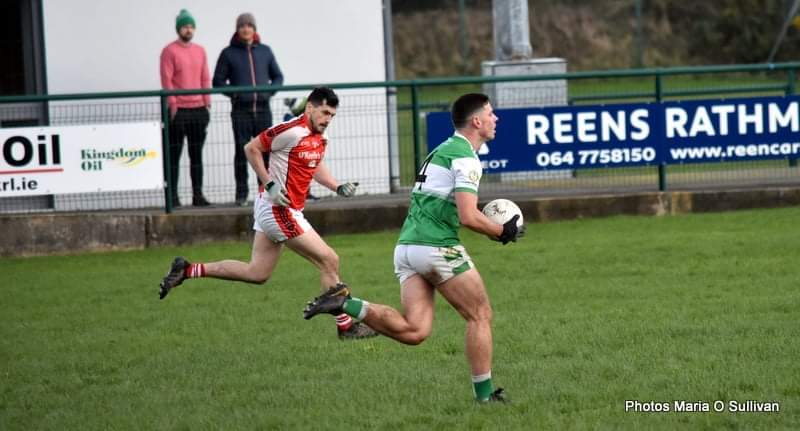 Our Senior men made the trip to Rathbeg a fruitful one as they overcame a big first half deficit to pinch a win in the final moments of an entertaining game. Having made a bright start through point by Finbarr Murphy and James O Donoghue things took a turn for the worse after 15 minutes when Rathmore struck for three goals in as many minutes to open up a commanding ten point lead. A cracking goal by Finbarr Murphy steadied the ship and points by Thomas Moriarty, Rob Leen and James O Donoghue closed the gap to three points by half time. Points by Finbarr Murphy(2) and Brian Kelly, from a long range free, drew the sides level before Rathmore nudged themselves in front again by two points, 3-7 to 1-11. Points were exchanged again before the scene was set for a dramatic finale.  A sweeping Legion move found Evan Smyth at the edge of the square and he was upended to give Legion a penalty. Up stepped James O Donoghue to tuck the penalty away to the keepers left to put his side in the driving seat with minutes to go. They coolly saw out the remaining minutes to come out on top by 2-12 to 3-8.
Team and Scorers..  Brain Kelly(0-1), Sean McCarthy, Danny Sheahnan, Cathal Sheahan, Peter O Sullivan, Kieran O Donoghue, Darragh O Doherty, Jonathan Lyne, Rob Leen(0-1), Stephen Flattery, Finbarr Murphy(1-3), Ian Prendergast, Alan Moriarty, James O Donoghue(1-6), Thomas Moriarty(0-1).
Subs used..Sam Benson, Evan Smyth.
Special mention must go to Sam Benson who pulled himself away from St Brendans Corn Ui Mhuiri celebrations to make a mad scramble to Rathmore to feature as a second half substitute. Commendable commitment by a young player.

WILL SHINES FOR THE SEM 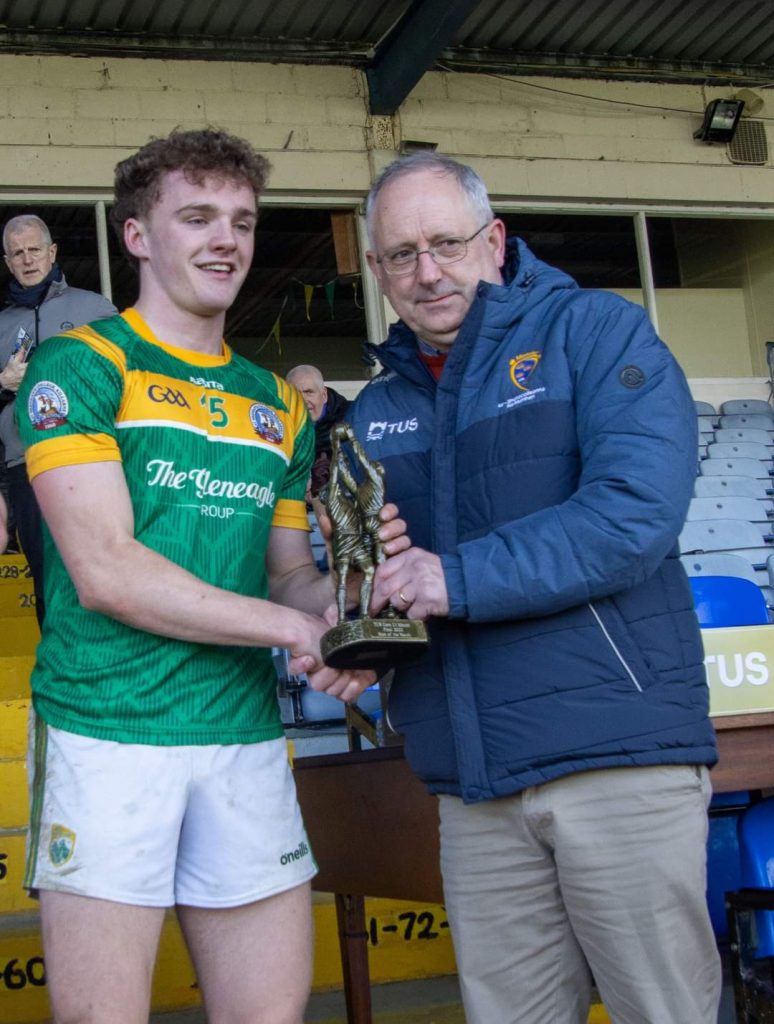 St Brendans College overcame the hotly fancied Tralee CBS outfit to grab the highly coveted Corn Ui Mhuiri title at a Spring-like Fitzgerald Stadium last weekend. Deprived of the services through injury of 2021 Kerry minors Rian Colleran and Luke Crowley they took the blow in their stride to upset the applecart. After a tight first half with the sides going in level at the break 0-8 apiece they made a run for home in the second half to leave the Tralee favourites reeling. The undoubted star of the show was Will Shine who cashed in for nine points and tormented the  CBS backline with his direct running. Not to be outdone Darragh Fleming played a starring role at right half back and kicked a magnificent point to boot. The Sem defence was air tight and when it was breached , goalkeeper Aaron O Sullivan stood firm and pulled off a couple of fine saves. Sam Benson was an unused substitute but as mentioned earlier he made the trip to Rathmore straight after to feature for our Senior team in the East Kerry Superleague. Well done to the four lads, team and management and we wish them well in their pursuit of the Hogan Cup where they now face St Marys Magherafelt of Derry.