Despite being out in the worst of the early morning weather the Kate O Leary led Laurels Bar Team took the honours in the Killarney Legion GAA Golf Classic with a superb score of 93 points. Partnered by sister Lorna and Anne Marie Gallivan they made light of the unseasonal rain to put manners on the pristine and picturesque O Mahonys Point Course.
Dovetailing to perfection they came home two points clear of the Seamus O Donoghue Electrical team of Frank Reen, Edmund Neville and Christy Naughton. Tadhg Fox and his Virgo Tyres comrades Declan Dennehy and John Coleman were in third place on 89 points, a place they secured with a superior back nine from Pat Nagle and the legendary Beaufort and Kerry GAA Lynch brothers, Paudie and Brendan.
Longest drive of the day went to the mighty swing of Conor Bohane while nearest to the pin on the 18th was Anthony McElligott.
Full Results
1st.. Team Laurels.. Kate O Leary, Lorna O Leary , Anne Marie Gallivan 93 points.
2nd..Team Seamus O Donoghue Electrical.. Frank Reen, Edmund Neville, Christy Naughton 91 points
3rd..Team Virgo Tyres..Tadhg Fox, Declan Donnelly, John Coleman…89 points
4th..Team Deirdre’s Fashions..Pat Nagle, Paudie Lynch, Brendan Lynch…89 points
The Club would like to thank most sincerely everyone who took part in the Golf Classic , sponsored a team or a tee box and bought tickets in the raffle. We are also very grateful to Patrick O’Donoghue and the GlenEagle Hotel group for their generous sponsorship of the Classic. Special thanks to Enda Murphy and his greenkeeping team who had the course in immaculate shape as per usual. Finally this event would not be the success it was, over 55 teams took part, without the work of our guru Sean Murphy who cajoles and coordinates the Classic with the help of the Finance Committee of Shaun O Connor,  Dave Randles, Liam McGuire, John Bowler, Shaun O Connor, Justin Healy and John Foran. 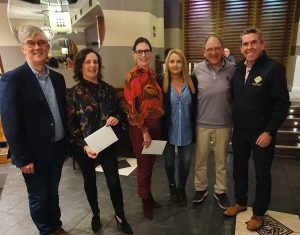 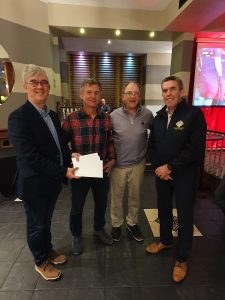