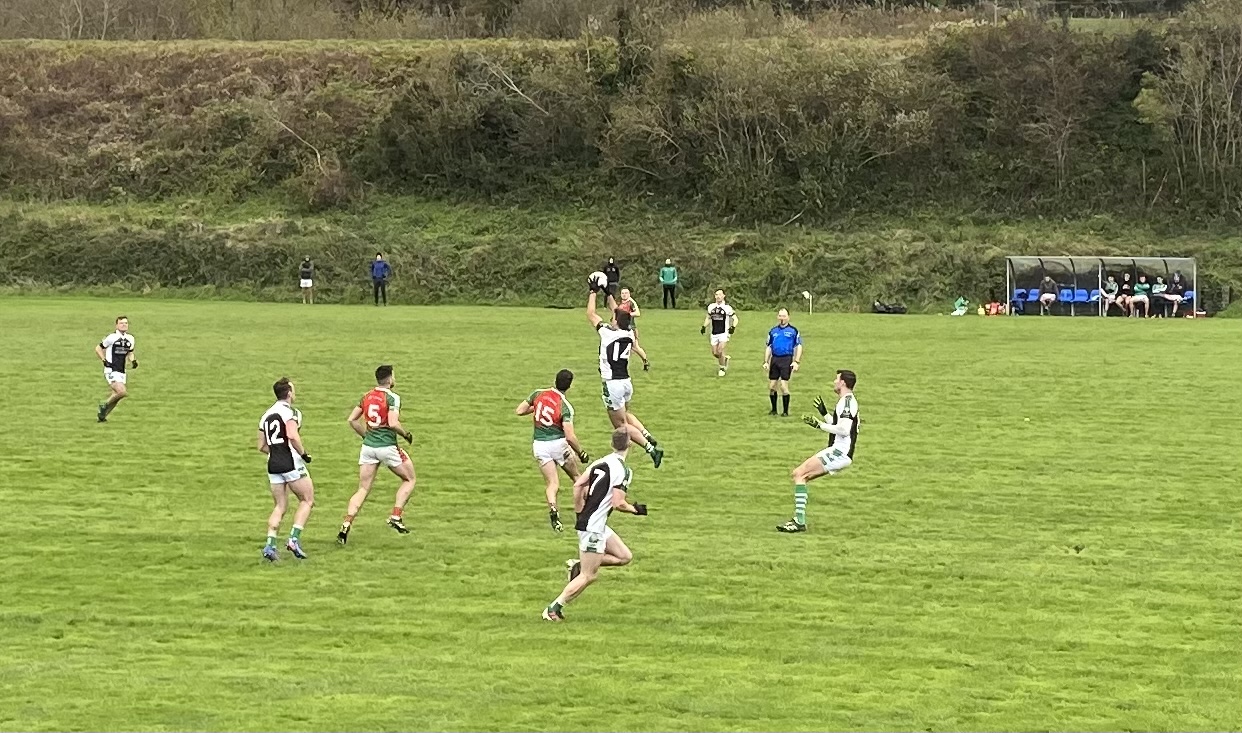 The seeds of this win for Killarney Legion were sown in the first half when despite playing against a gale force wind they retired to the Direen dressing rooms with a one point advantage, 0-6 to 0-5.  This was down to playing a smart brand of football, retaining possession, staying out of the tackle and making timely incisive attacks at the opportune time.  Central to all this was the influence of James O Donoghue who conducted the orchestra with great poise while Padraig Lucey picked up the baton when required also.

Both teams made late changes, Matt Keane replacing Gary O’Leary for the visitors while Darragh Lyne and Will Shine were absentees for the home side, with Luke O’Donoghue and Thomas Moriarty in their stead. Kilcummin started the brighter, using the elements to move the ball quickly, and led with two points from Noel Duggan(free) and the impressive wing back Philip Casey. James O Donoghue rotating positions constantly in the attack got his side on the board with a free before Cian Foley judged the elements perfectly to land a fine point. O Donoghue with a free and Ryan O’Grady with a point from a mark  drew the sides level before Kieran Murphy planted a 45 through the posts. It was around the end of the first quarter that Padraig Lucey started to dictate around the middle and good use of the ball  drew fouls from the Kilcummin defence which O Donoghue punished. Thomas Moriarty clipped over a nice point from the corner but it was Kilcummin who had the last word of the half, a free converted by wingback Casey.
The one thing you can never have when you face a team as spirited as Kilcummin is complacency and while holding a half time lead after playing against the worst of the weather might give you a sense of it , it’s important to thread carefully. Noel Duggan made sure Kilcummin got the second half off on the right note with a point and with some strong runners in their ranks they are well capable of holding any team . Both teams were now also down to fourteen men as a result of a skirmish that happened as they left the pitch at half time, Shane McSweeney and Denis Sheahan both seeing red. O Donoghue picked up from where he left off with two more, one from a free and from play. A pivotal moment saw Kilcummins outstanding defender Dara O Callaghan see a black card and this was Legions que to push on. O Donoghue from a free made it 0-9 to 0-6. Padraig Lucey then fielded a Brendan Kealy kick out to set up Thomas Moriarty and O Donoghue again with a fisted effort opened up a five point ,0-11 to 0-6.
An astute piece of thinking from Kieran Murphy sent Noel Duggan through on goal , his first shot batted away by Brian Kelly , who again denied Duggan from the rebound. That visit was not a waste though as Philip Casey struck over his third point. Both teams ran their benches in an effort to maintain momentum and it was Legion who garnered more with points from Thomas Moriarty, Finbarr Murphy( a superb assist by Cian Gammell), O Donoghue and a fine effort from Gammell . Kilcummin to their eternal credit kept plugging away with further scores from  the ever accurate Noel Duggan.  They had a few half sights at goal but the Legion defence, competent throughout, held firm.
KILLARNEY LEGION..Brian Kelly, Rob Leen, Darragh Doherty, Cathal Sheahan, Peter O Sullivan, Danny Sheahan, Jonathan Lyne, Padraig Lucey, Cian Gammell(0-1), Denis Sheahan, James O Donoghue(0-9), Luke O Donoghue, Ryan O Grady(0-1), Jamie O Sullivan, Thomas Moriarty(0-3)
Subs.. Finbarr Murphy(0-1) for Luke O Donoghue, Shaun Keane for Jamie O Sullivan, William Shine for Thomas Moriarty, Podge O’Connor for Cathal Sheahan.
KILCUMMIN..Brendan Kealy, Philip O Leary, Dara O Callaghan, Donal Maher, Dan Moynihan, Chris O Leary, Philip Casey(0-3), Kieran Murphy(0-1), Kevin Gorman, Mark O Shea, Matt Keane, Cian Foley(0-1), Noel Duggan(0-4), Shane McSweeney, Paul O Shea.
Subs…Eoghan O Donovan for Mark O Shea, Mikey O’Shea for Cian Foley,
Referee Padraig O Sullivan had a fine game, letting the game flow whilst being firm when he needed to be.
Man of the Match James O Donoghue(Killarney Legion)